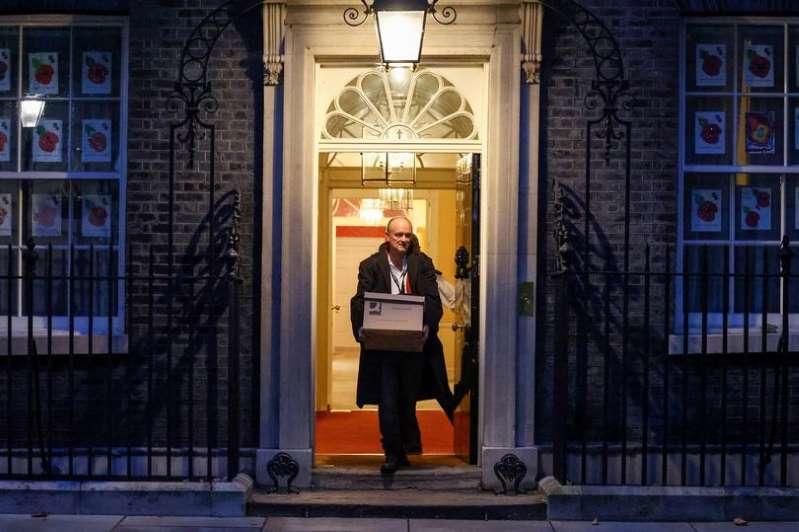 ⛈️ A week is a long time in politics

Hi I'm PR Futurist Stuart Bruce and I'd like to welcome you this week's That Was The Week That Was.

Apologies as it is a bit of a bumper issue this week... and I've even left stuff out!

In the UK it's been a busy week at the intersection of public relations and politics. At the start of the week a Sunday Times' exclusive revealed that a small Newcastle-based public relations company had been awarded a £670,000 contract to work directly for the government's COVID-19 vaccine czar. There were lots of question around the probity of the procurement process which became worse when the Financial Times revealed one of the company's directors worked with one of the UK prime minister's adviser's farther-in-law in the North East of England - Dominic Cummings as if you needed to ask.

Government communication remained in the spotlight with the news that Boris Johnson was to appoint Lee Cain, his director of communications (and Dominic Cummings' close mate), to be his new chief of staff. This was swiftly followed with the news the appointment had been vetoed by Carrie Symonds, Johnson's live-in girlfriend (herself a former head of communications for the Conservative Party), and Allegra Stratton, his new press secretary for the No 10 televised briefings.

The news of Cain's appointment was swiftly followed by the news of his resignation amidst rumours of mighty rows in Downing Street. The following day Dominic Cummings followed him out of the door by resigning and staging a photo opportunity of him carrying his 'cleared desk' box out of the famous black door. 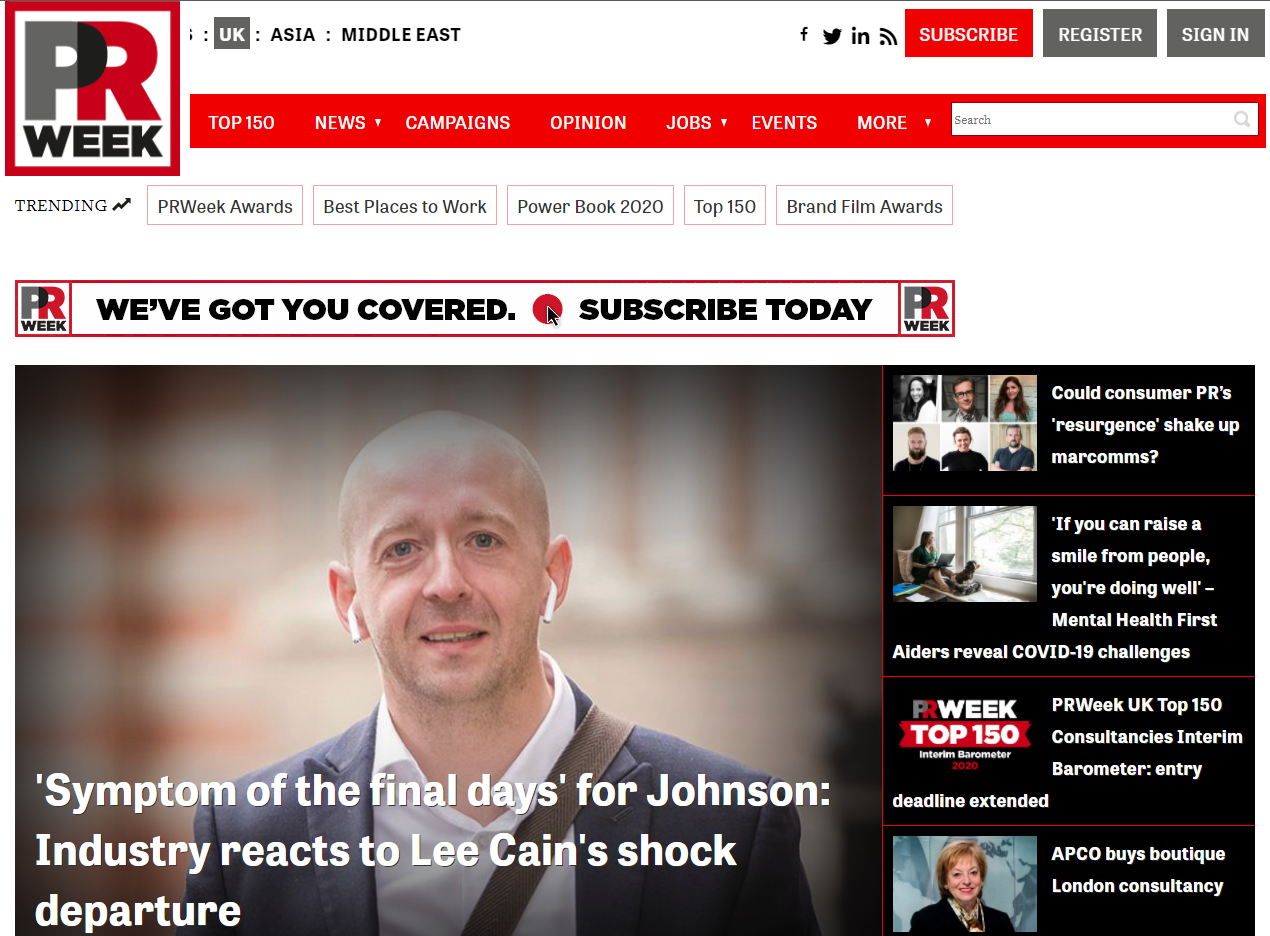 PRWeek asked some senior public relations and public affairs practitioners for their reactions to the resignation of Lee Cain, the head of communications for UK prime minister Boris Johnson. This was my quote that was used: "It’s a symptom of the final days, but the final days can be short or long. This government has survived things that would have had far more serious consequences in previous administrations of any colour. It is disappointing the replacement is yet another journalist, appointed because he’s part of the inner circle. The catastrophic failure of government communications highlights why public relations needs to be strategic. The failure to appoint a public relations professional shows the government is still more interested in spin than a robust strategy that saves lives and protects the economy." 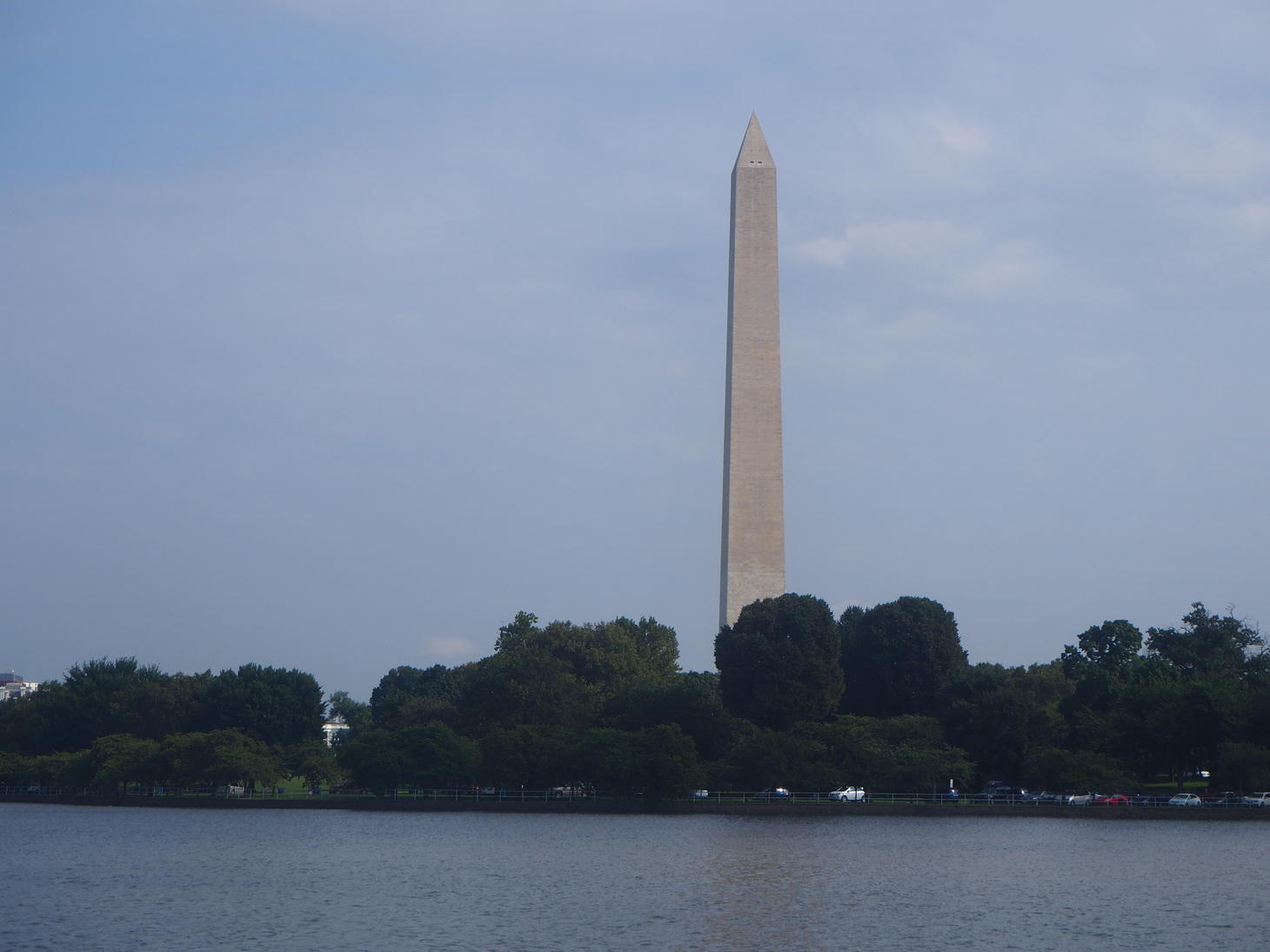 💩 Post-Trump how can communicatons professionals rebuild trust in institutions?

You can always rely on Paul Holmes to give an insightful perspective on public relations and communications. Much of what he writes about US institutions could equally be said of UK institutions. The UK's Government Communication Service was probably the best in the world. I've certainly said so when I've cited its work, its playbooks and guides to my government and corporate clients. Unfortunately, it has been seriously undermined in recent years by political interference making most government communications look like it has been conducted by incompetent amateurs at best or dangerous saboteurs at worst, rather than the world-class professionals I know constitute most of its staff. In this long read essay Paul explores why public relations professionals have a critical role in rebuilding the information infrastructure, restoring faith in media , science and the integrity of democracy. 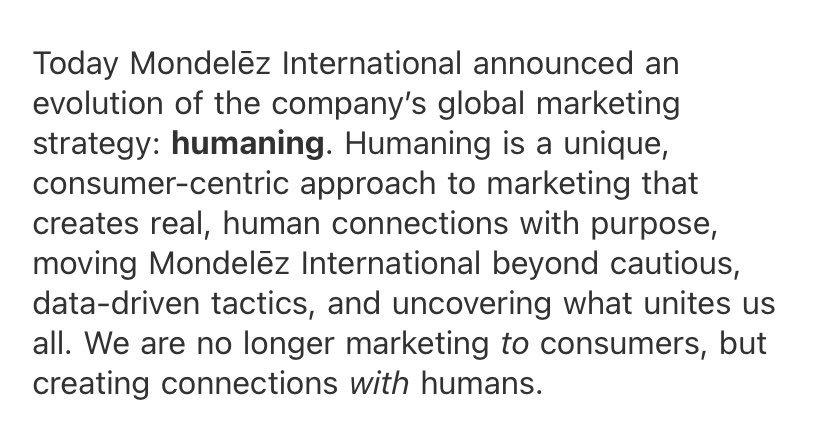 I have so many questions, but my main one is how many humans did this utter rubbish have to go past to get approval without somebody vetoing it and saying it made Mondelēz International look totally out of touch? Communicating clearly is such a basic requirement of good public relations it shouldn't even need stating. Mondelēz is so proud of its work that it has even made a video to celebrate its incompetence. 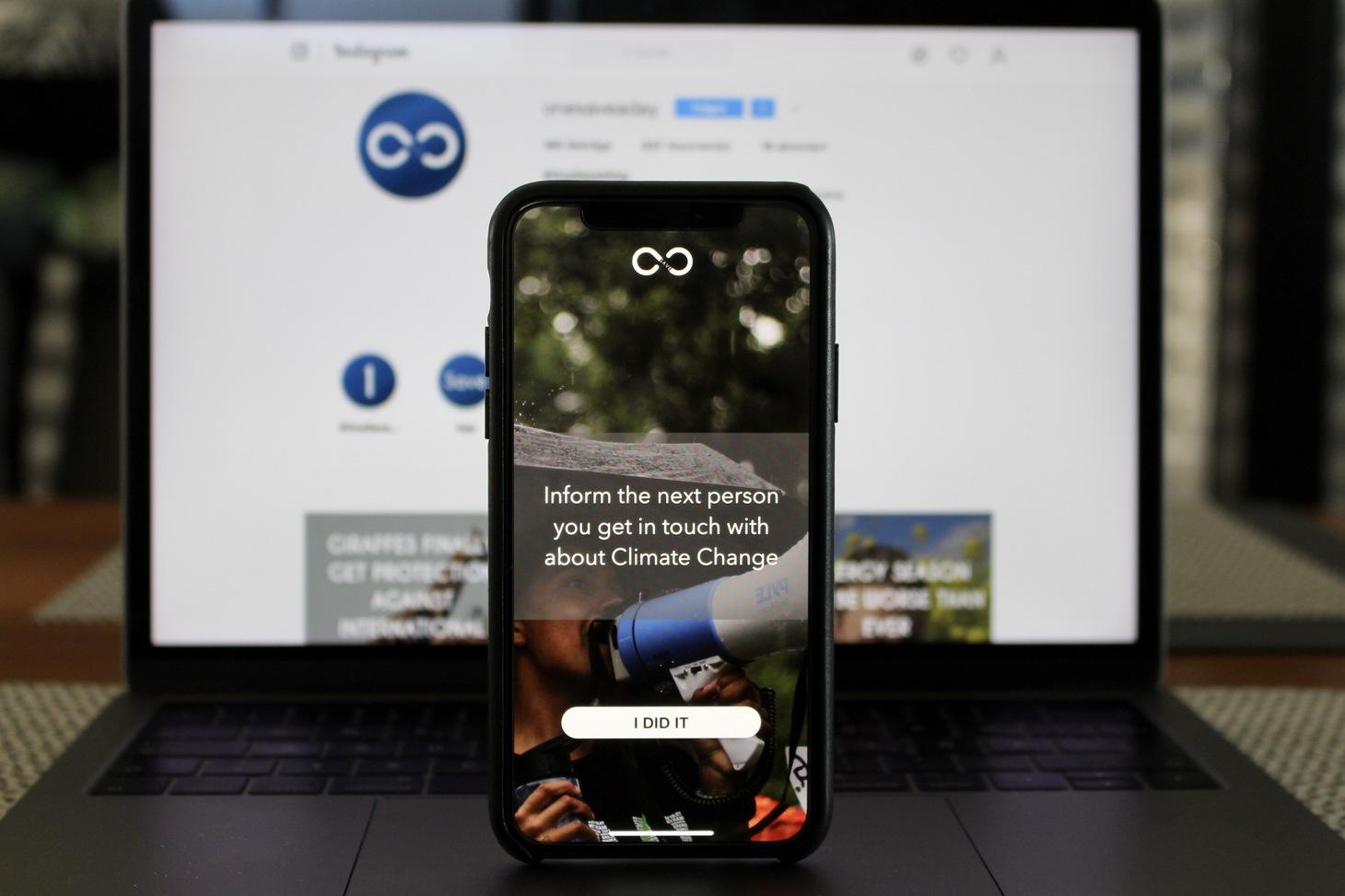 Despite all the talk about purpose and ESH (environment, society and governance) most companies still aren't getting it. The Financial Reporting Council says most company reports were "not meeting investor needs" on environmental and climate change data. While its essential that companies follow the FRC's guidance and publish better environmental data we mustn't allow that to be the only focus as there is much more to responsible corporate behaviour. Thanks to Simon Pringle at Project Rome for the spot. 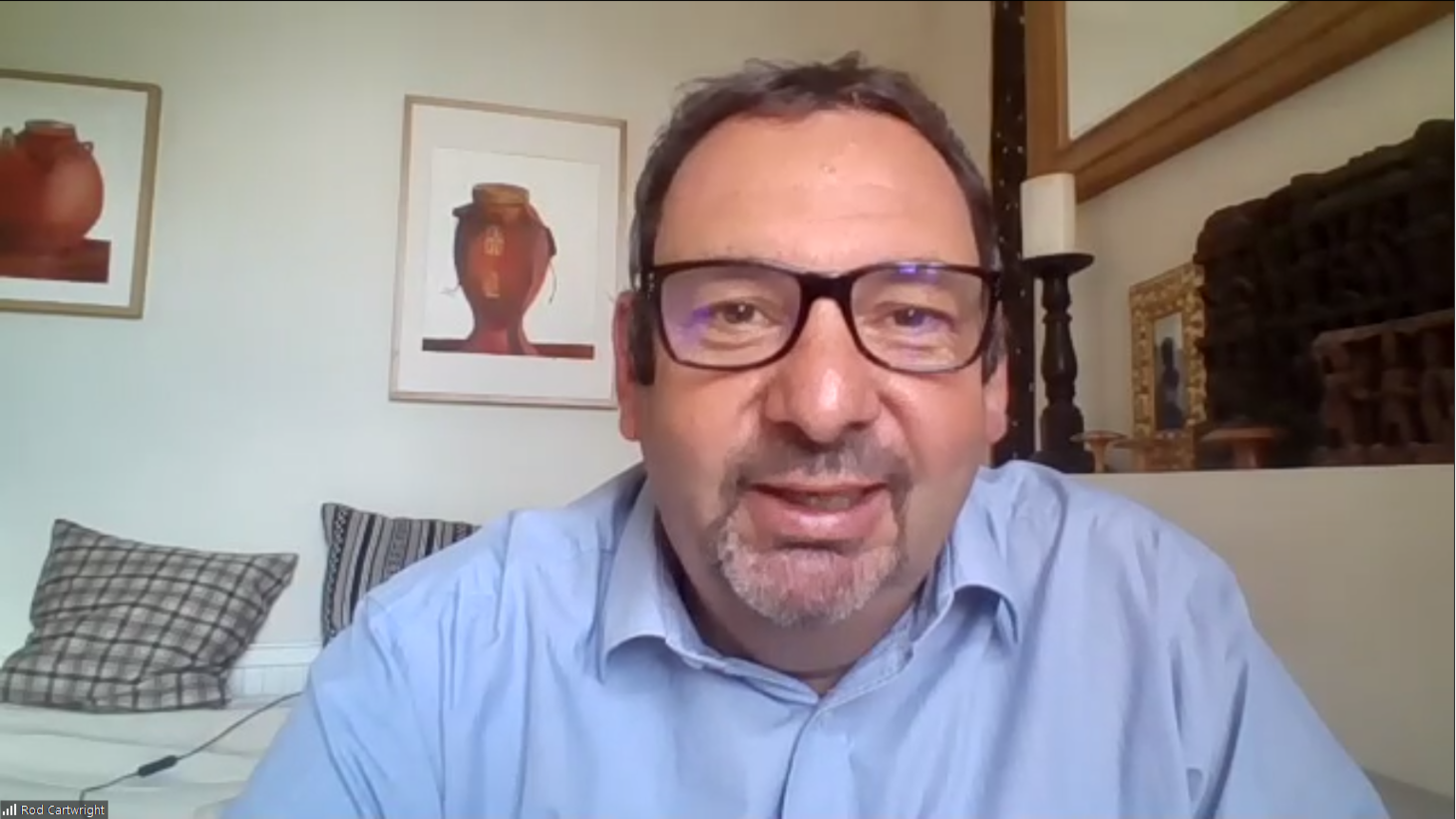 📺 Is government comms being sacrificed for politics, policy and procurement?

Great opinion piece by Rod Cartwright on the latest procurement fiasco by the UK government. Since Rod wrote this it has emerged the government has hired 23 different communication consultancies since January. This shouldn't be an issue as effective communications is critical in fighting the pandemic, preparing for Brexit and much more. The big questions are around the transparency and ethics of the procurement process with several 'surprising' firms awarded contracts all of which have one common denominator which is links to senior members of the Conservative Party. Ethical disclaimer - I work with Rod as a co-founder of The Decision Circle, but can guarantee that no bribery was involved in him featuring in two consecutive editions of TWTWTW.

During Prime Minister's Questions Kier Starmer, the leader of the UK Labour Party, asked Boris Johnson about the government's £130 million spend on public relations since January. The Chartered Institute of Public Relations issued a statement with a quote from its president Jenni Field saying the political discussion should recognise the importance of effective public relations and communication. It also clarified that the £130 million didn't relate to consultancy fees but also included research, design and advertising cost (the bulk of it is likely to have been media spend). 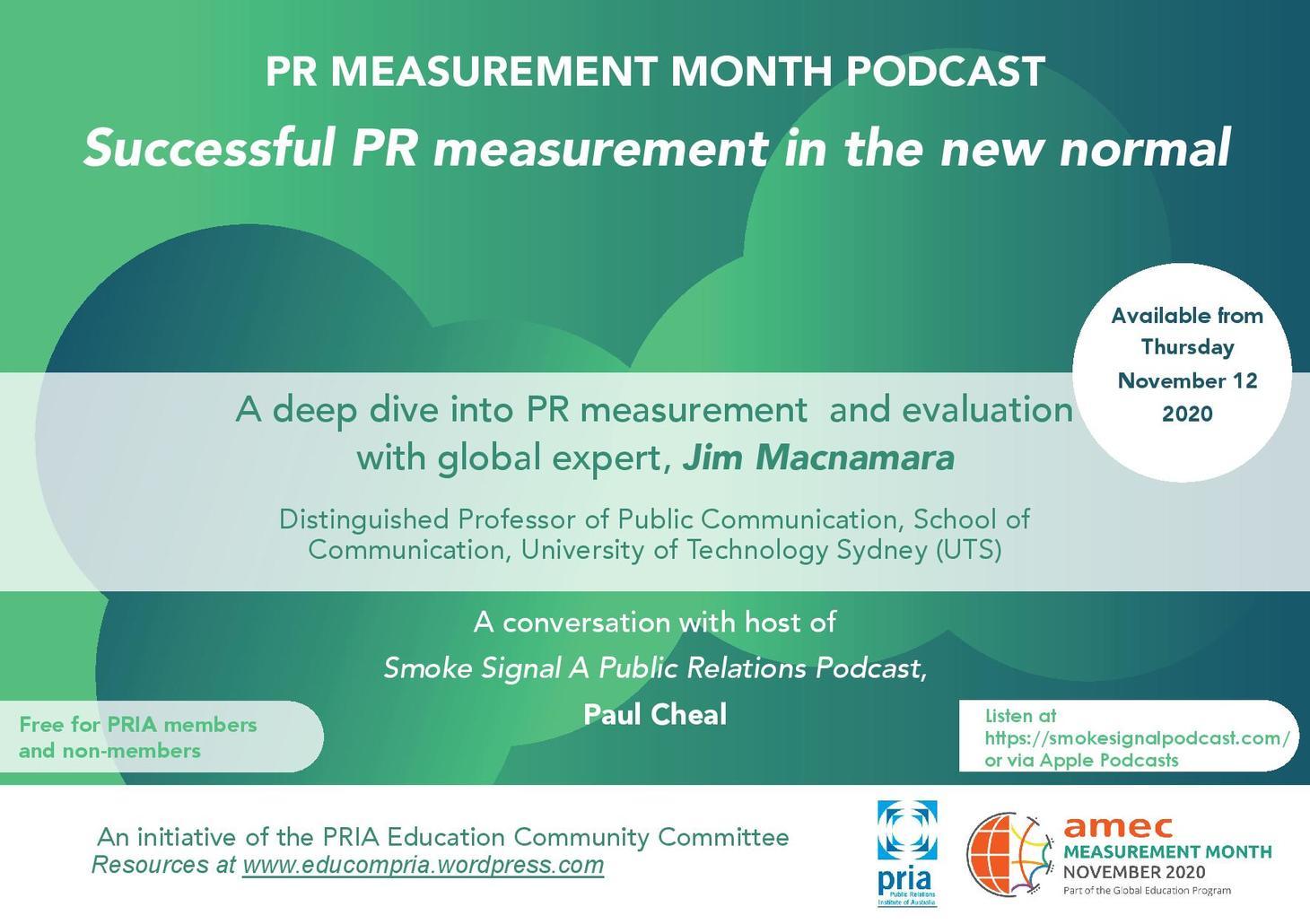 I have a love/hate relationship with podcasts. The hate is I'm a fast reader so usually prefer to consume content by reading it. It's also the main way I retain it as I'm far more likely to forget something I've heard in a podcast or seen in a video. The love is that sometimes they have fantastic, unmissable content. This is a great conversation with Professor Jim Macnamara, Distinguished Professor of Public Communication, University of Technology, Sydney. Listen to the whole thing as his explanation of measurement, evaluation and learning very much reflects the approach I take to work with clients I'm helping to improve their communication measurement. The last time I was in Sydney I had breakfast with Jim to discuss this and other topics (including the CIPR's chartered status which he also talks about in this podcast). Via Richard Bailey's Friday round-up for PR Academy. 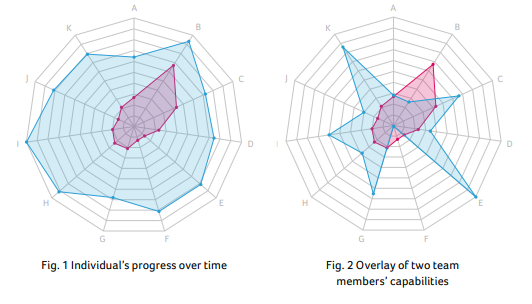 Thanks to working with Professor Anne Gregory I already use the Global Alliance Capability Framework online radar tool. It's fantastic for when I'm working with in-house communication teams, PR agencies and even individuals on professional development and modernising how they work. I use it as part of structured interviews with individuals and teams to assess existing professional capabilities and work out the best areas for development. One issue with this approach is the tool works with the 11 top-level capabilities and doesn't expose the 37 sub-capabilities. Stephen Waddington has created a spreadsheet that enables you to input all 37 and see them visualised in traffic light colours. The main benefit I see of this approach is it is scalable as I cover the 37 sub-capabilities as discussion points in the individual interviews, which is obviously harder to scale than a spreadsheet. Via Stephen Waddington's blog. 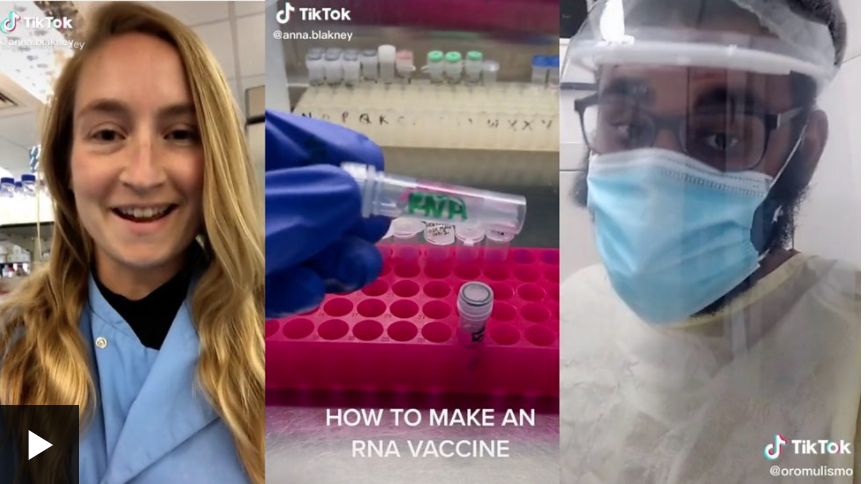 💉 COVID-19 vaccine scientists take to TikTok to promote their work

This is how scientists working on COVID-19 vaccines are using TikTok to communicate their work. Another great example of why PR professionals need to take notice of TikTok and start thinking of it as far more than just crazy dance memes more suited to consumer PR than serious work. Earlier this year I wrote a blog post on corporate TikTok examples. The use of TikTok is a result of work by Team Halo, a new communications project which is a collaboration between the United Nations, TikTok and Facebook. It's currently recruiting for a PR and media manager, which looks like a fantastic role to me. Great story via the PRCA's Souha Khairallah. 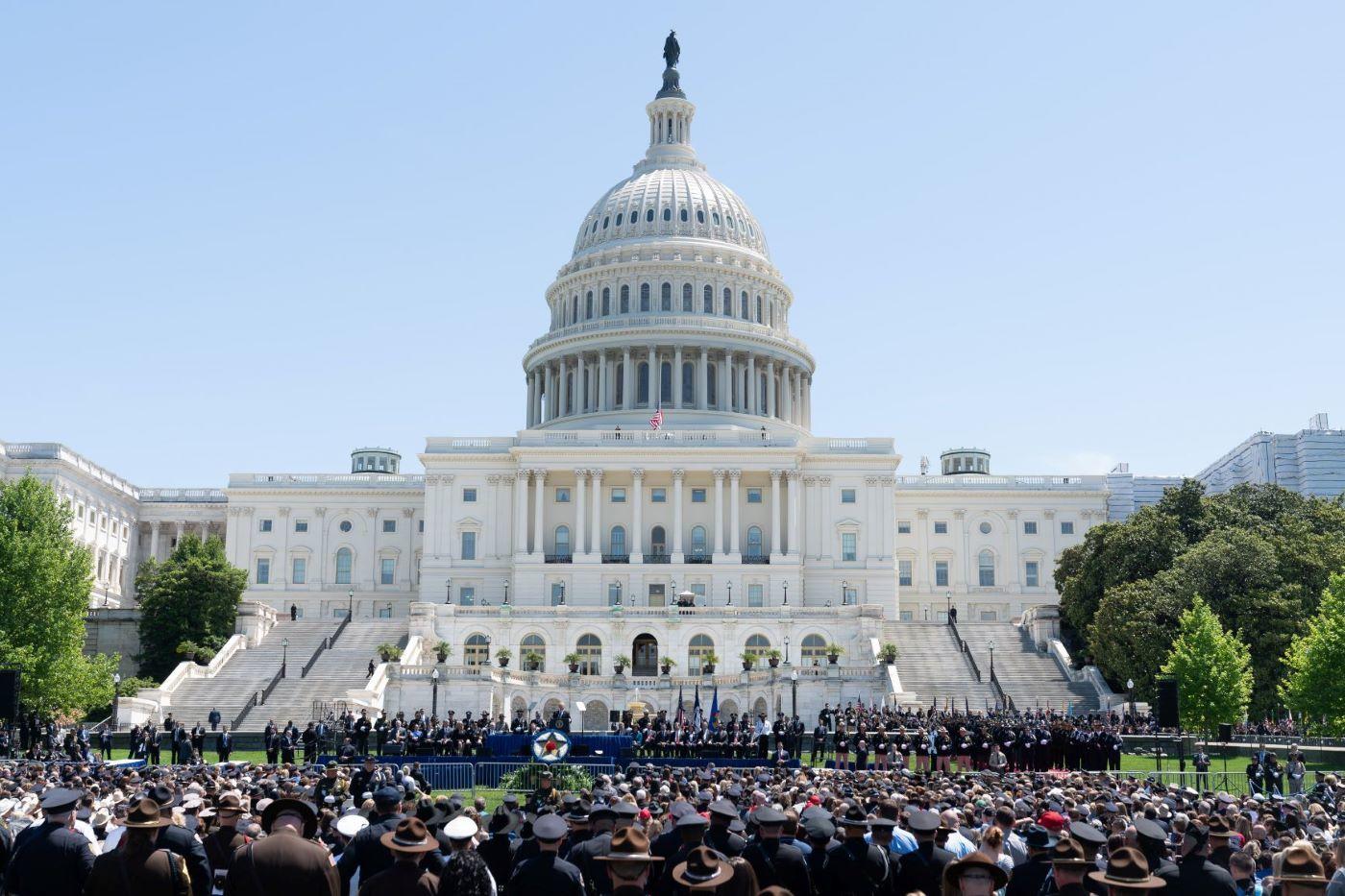 I signed up for a Parler account as soon as I heard about it in early 2019, a few months after it launched. It's my job to track new social platforms, so I try to sign up for everything, even if I'm not using them actively. After the first few days I didn't even open the app again until last week. It's a scary place with not just alt-right content, but also lots of explicit material that wouldn't be allowed on normal platforms. If you don't know much about (and it you're in public relations or communications then you should) this Wall Street Journal article is a good explanation. 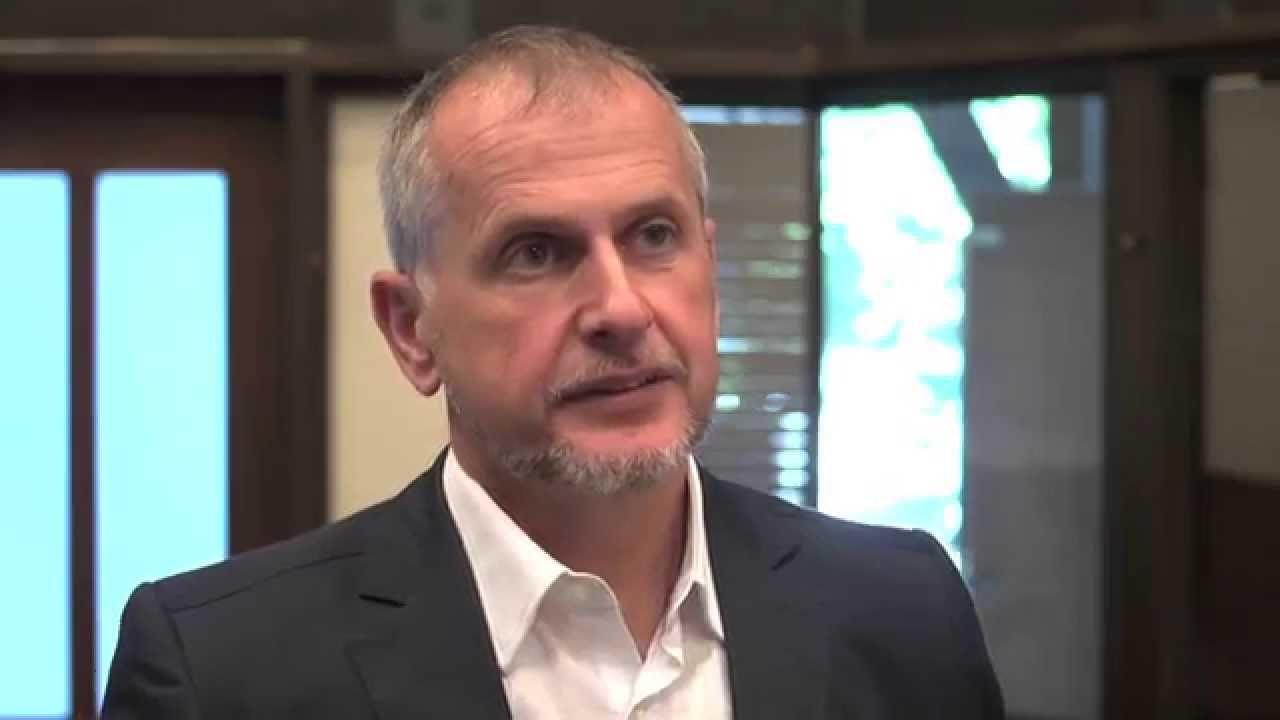 Before going plural (he's got his fingers in lots of pies) David Brain was the CEO and president of Edelman in Asia Pacific, Middle East and Africa. Before that he led Edelman in EMEA and has also been joint-CEO of Weber Shandwick after it acquired BSMG (Charles Barker). Suffice to say he knows his stuff when it comes to running a successful public relations business. He's written a fantastic analysis of why consumer PR is important. Go read it as it's full of intelligent thinking, but the top line is 'follow the money'. Via David Brain's blog.

How can I help?

Remember I'm always available to help you with consultancy or training on modernising your public relations practice including team skills and capability audits, measurement and evaluation and the choice, purchase and implementation of public relations technology #PRTech. Just get in touch via my Stuart Bruce Associates website. I'm always happy to jump on a Teams or Zoom call.

There are links in the footer to follow me on Twitter, connect with me on LinkedIn or to read my PR blog.