🐡 The abuse of numbers and when PR becomes the whistleblower

It's another week and another That Was The Week That Was newsletter from Stuart Bruce trying to help you make sense of the ever-changing world in which we live in.

This week I look at a great new guide to research, analysis and evaluation, as well as a crisis communications case study which is example of the Streisand effect and a story about how a PR professional was forced to become a whistleblower to try to improve the working lives of his colleagues.

The Institute of Public Relations (not to be confused with the UK-based CIPR) has published The Communicator's Guide to Research, Analysis, and Evaluation. It is an excellent piece of work. It tackles issues such as why research, analysis and evaluation are important and where they fit in the public relations process; the five core components (landscape analysis, setting objectives, developing strategy, tactical creation and activation, evaluation and critical improvement); and CommTech tools.

😖 The use, abuse and misuse of numbers in the news

Despite the clickbait headline "How safe is the AstraZeneca jab?" this is a great article about the use and misuse of numbers in the news. The example used is the 37 people who have suffered potentially life-threatening blood clots after taking the Oxford/AstraZeneca vaccine. It is meant to sound bad, but in reality it is impossible to determine anything from that number on its own without other numbers to give it context. How many people have had the vaccine? How many blood clots we would expect to see in that many people, if we hadn’t given them the vaccine?

The article is to promote a new book How to Read Numbers: A Guide to Stats in the News (and Knowing When to Trust Them). PR and communications professionals have an ethical responsibility to use numbers properly. This applies to the communications we issue and the way we interpret numbers in our own insight, measurement and evaluation. 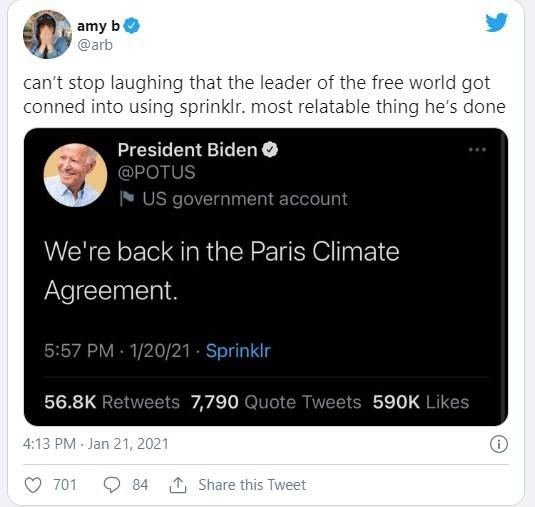 Sprinklr is one of a myriad of companies providing a social media management tool. It operates at the 'top end' of the market, which is a way of saying it's not a freemium or low cost tool. It's also an incredibly insecure company as this article details its disturbing response to receiving minor criticism in a tweet that poked fun at President Biden for being "conned into using Sprinklr". Sprinklr responded by aggressively harassing the innocuous tweet's author by contacting her employer and threatening legal action.

It's a classic example of the Streisand effect where an attempt to hide, remove or censor something has the unintended consequence of promoting it. Most people would never have known about the tweet had it not been for Sprinklr's incredibly aggressive reaction.

Until this article Sprinklr was definitely on my shortlist of social media management tools I'd consider for clients. Today, I'm not so sure. The tool might be as good as it always was, but the company has shown itself to be less than moral or competent.

Threadit is a free new tool from Google. It enters a crowded market of browser based tools that let you easily and quickly record and share a video of yourself and if you want of your screen. The main differentiator appears to be that it's currently totally free and it creates an automatic transcript.

If you are a Gmail user then it is also a competitor for tools like SendSpark (which I shared a couple of weeks ago) that let you embed the video in an email with a thumbprint gif.

An interesting interview with Francis Ingham, director general of the PRCA.

👨‍💻️ Screen time and tech addiction - should we be worried?

The problem with interview based podcasts is they are mainly dependent on the quality of (or my interest in) the guest. This episode of Paul Sutton's Digital Download podcast is a corker as it's an interview with Becca Caddy, tech journalist and author of Screen Time: How to Make Peace with Your Devices and Find Your Techquilibrium . Becca helps us to think about if it is even valid to spend time worrying about how long we spend looking at screens. Disclaimer - Becca used to work for me and I received a free copy of Screen Time and am about to publish my own review of it.

Have you activated two-factor authentication on all your social media and digital accounts? If you haven't then this cautionary tale should help you to understand why you need to. Even if your social media accounts are just personal you should secure them. If you are use them professionally (and most PR and communications people should be doing that) then you absolutely need to be secure.

If you are managing or helping to manage social media accounts for organisations, executives or other individuals then you need to ensure they are all adequately protected. You need to use a combination of secure passwords (using a password management tool such as LastPass) and two factor authentification.

When this story first broke on the BBC it hit home with me for two reasons. It was about Sellafield and I'm from West Cumbria, but more importantly it was about a friend. Karl Connor was a senior communications professional at Sellafield where he'd held a variety of roles. I taught him when he was studying postgraduate qualifications at Leeds Beckett University.

Often as PR professionals our role is to defend our employer or clients from accusations by whistleblowers, but occasionally it is our role to be the whistleblower. Karl's bravery reminded me of Peer Jacob Svenkerund who used to be the director of communications at Norsk Tipping, the Norwegian National Lottery. I met Peer when he gave a keynote at the Crisis6 conference to talk about his experience of being a whistleblower. I blogged about it at the time.

In this guest post on Stephen Waddington's blog Karl Connor shares his story of what it was like to become a whistleblower and how it is especially hard in a small close-knit community like West Cumbria.

No spam, ever. I'll never share your email address and you can opt out at any time.